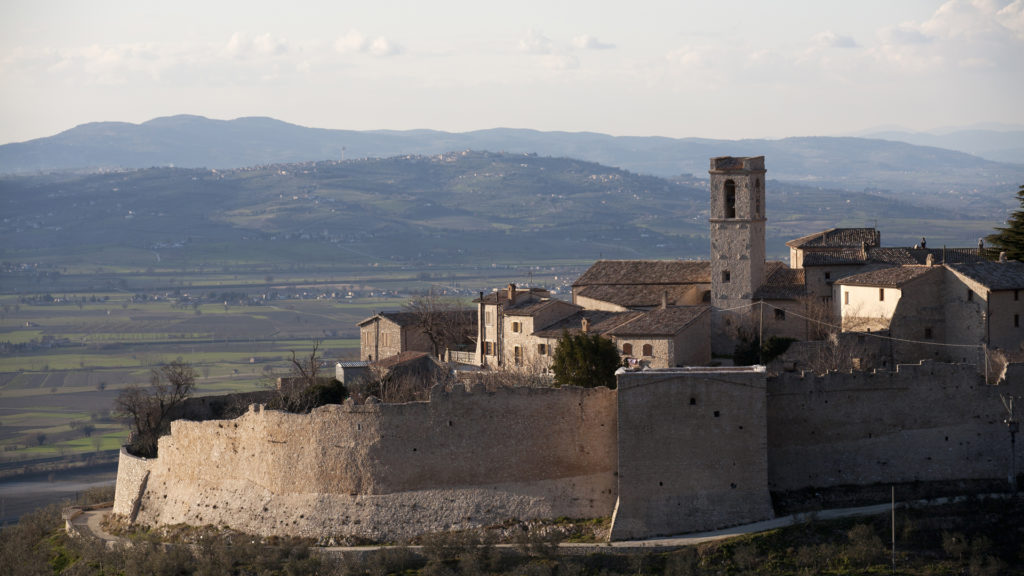 The town of Campello sul Clitunno has two centres: the medieval fortified village of Upper Campello, built up around a primitive fortified castle (10th-11th century), immersed in a sea of olive trees that cover the surrounding hills, and Lower Campello. According to popular belief the castle, from which a large portion of walls and towers still stand today, served as a bulwark to protect the Spoleto Valley that lies below. The castle was erected by Rovero, the Baron of Champeaux, who ruled over the territory. The town centre still preserves a large portion of its 14th century structure intact with an ancient access gate to the residential district and the church dedicated to St. Donato, a structure with Romanesque origins whose interior was reconstructed in the Baroque period. The village of Lower Campello formed around the 16th century when the inhabitants of the castle, who were no longer forced to defend themselves from bandits and assailants, decided to build new homes in the lower-lying areas, thereby giving rise to a new village where the Madonna della Bianca Church was built in the 16th century, in honour of a votive image frescoed inside of a shrine, depicting the Madonna with Child, both with light skin and blonde hair. The church is adorned with frescoes by the painter Giovanni di Pietro known as Lo Spagna. Not far from the village centre the tiny church of St. Sebastiano rises up, built in the early 1500’s as an ex-voto to commemorate the end of a plague. The inside of the church is embellished by frescoes depicting St. Sebastian, who was traditionally invoked for protection against the plague. One of the area’s most important attractions are the legendary Clitunno Springs, whose beauty and importance date back to the Romans: dedicated to the God Clitunno, who formulated his oracles here, the site was celebrated by Pliny the Younger, Propertius, Virgil and in more recent times by Byron and Carducci. These once navigable waters are now the site of the Springs, a small mirror of water characterized by numerous species of plants. Less than a kilometre away is a small and just as special artistic treasure: the Tempietto sul Clitunno, a tiny temple named after the river that runs nearby. Built between the 4th and 5th century A.D. over the ruins of an ancient pagan sacella found in the area, the temple was constructed exclusively with Roman ruins and consists of two superimposed rooms from where visitors can admire one the oldest, if not the oldest, cycle of frescoes in the region.