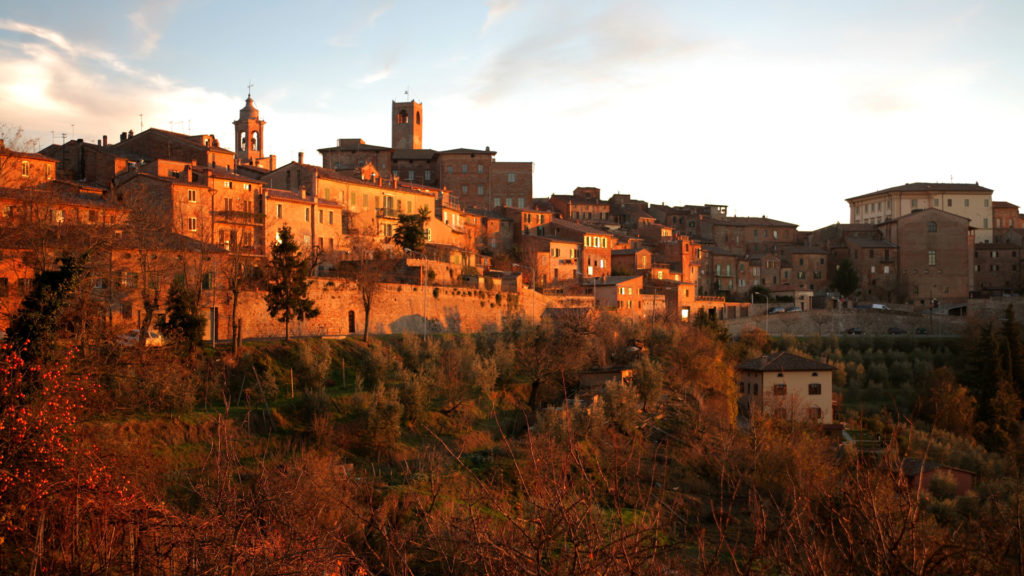 The city rises up in a dominating position overlooking the Chiana Valley, not far from the Tuscan border, in the midst of hills that slope down towards Lake Trasimeno and the Chianti Valley. In the past, its strategic position made it an important fortified outpost of the Lombard Tuscia and the territory bordering between the Papal State and the Grand Duchy of Tuscany. However, the territory was previously inhabited, first by the Etruscans and then by the Romans who founded a powerful “castrum-plebis” here, as attested to by a unique Etruscan obelisk unearthed in the area, which is currently on display on the ground floor of Palazzo della Corgna. Located in the centre of town is Piazza Gramsci square that, together with Piazza Plebiscito square, rises up on the highest point of the hills, providing a dramatic backdrop for the Cathedral of Saints Gervasio and Protasio, an age-old parish dating back to the 8th century that was later reconstructed and expanded in the late 12th century and then completely reconstructed in 1600. The interior houses two important paintings on wooden panels by the illustrious painter Pietro Perugino who was born here in 1450: in the apse there’s the Madonna with Child between Saints Peter, Paul, Gervasio and Protasio. In the second chapel on the left there’s a wooden panel depicting the Baptism of Jesus. Alongside the façade of the Duomo cathedral stands a symbol of the city’s historic municipal power, the Civic Tower, which faces the medieval Palazzo dei Priori, which rose up in 1300 as a seat for the priors of the arts. Also looking out onto Piazza Gramsci square is the grandiose Palazzo della Corgna, the city’s most important noble residence designed by the Perugian architect Galeazzo Alessi who was commissioned by Ascanio della Corgna, named governor of Città della Pieve in 1550 by his uncle and Pope Julius III.