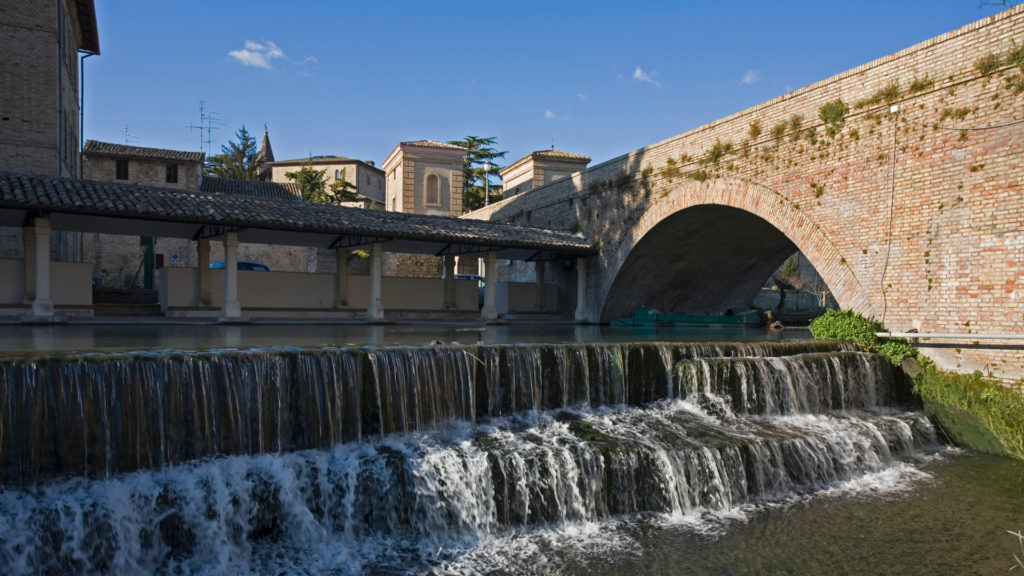 The origins and development of Bevagna, known by the Romans as “Mevania”, are tied to the passage of the ancient Via Flaminia road, along the western side of which this primitive settlement rose up. This is how Mevania became an obligatory stop along this important consular road, spurring the rapid urbanization process as evidenced by numerous archaeological finds in addition to epigraphic and literary sources that have handed down images of a flourishing and wealthy city, located in the centre of a fertile countryside where illustrious citizens built their suburban villas. The medieval city was built over the Roman one by reusing the ancient walls that completely surrounded Bevagna’s city centre. In the 12th century the town was built around the famous Piazza Maggiore square, one of the most interesting medieval urban constructions in Umbria, unique for its asymmetric shape and characterized by its “angular” prospective created by the buildings along its perimeter. Looking out onto the square are some of the most fascinating, age-old structures that stand as symbols of civil and religious power: Palazzo dei Consoli, built around 1270, the exterior of which is enlivened by two orders of double lancet windows and a majestic staircase that today leads to the Torti Theatre, built in 1886 with three tiers of boxes and a gallery. A gem of Umbrian Romanesque architecture is the nearby Church of San Silvestro, the work of the master Binello who left his signature on the façade alongside the date the church was built (1195). The completely bare interior, in accordance with the extremely rigid cannons of the Romanesque style, is characterised by the presbytery area perched on top of a beautiful staircase, under which a small yet amazing crypt opens up. Rising up on the opposite side of the square is the Church of San Michele Arcangelo (12th- 13th century) with its grandiose Romanesque façade, horizontal crowning and a precious portal partially constructed with Roman ruins. Evidence of the past can also witnessed by walking along the narrow streets, in the little squares that unexpectedly open up and in the most unusual corners which hide small treasures belonging to different eras and styles: conspicuous are the ruins of the ancient Roman Temple that was later transformed into the Church of the Madonna della Neve. Together with the Roman Mosaic from the 2nd century A.D. that once belonged to a thermal complex, these monuments both attest to Bevagna’s importance in the past. The Church of St. Francis is perched up on the highest point of the city, which can be reached from a steep staircase along the long and narrow Piazza Garibaldi square. Along the Corso, the main street that runs the entire length of the city, the noble Palazzo Lepri faces out, which houses a museum on the ground floor.