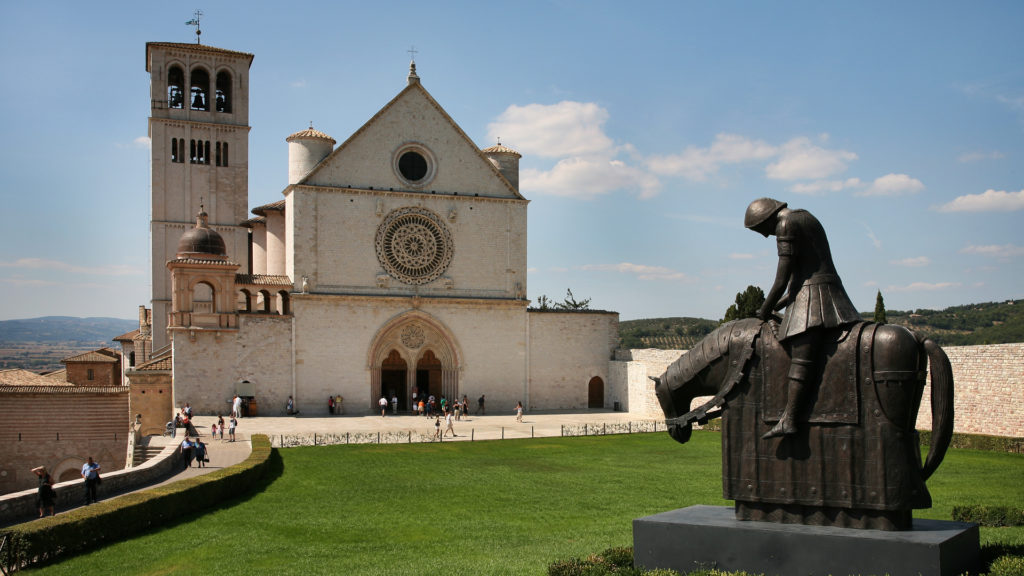 Arranged into terraces along one of the slopes of Mount Subasio is Assisi – a religious, spiritual and artistic centre of international renown. The memory of St. Francis, who was born, lived and preached in Assisi, pervades not only in the numerous buildings tied to his memory, it can also be felt in the atmosphere of this notorious holy site. The view of the city from below is dominated by the imposing Holy Franciscan Convent, one of the most important temples of Christianity, whose powerful and imposing mass makes it look more like a defence post than a place of worship. Next to the majestic convent rises up the Basilica of St. Francis, for which the more appropriate term would be Basilicas, since the entire complex is made up by two superimposed churches, which define two different construction phases, incorporating typical Romanesque-Umbrian elements that are skilfully merged with a French Gothic style. These two churches were built to meet two distinct needs: while the Lower Basilica was destined from the very beginning to be used as a crypt, or in other words to house the body of the saint, as witnessed by the building’s architecture, with its very low ceiling and dim light that penetrates from the few windows, the Upper Basilica was built to welcome the impressive mass of worshippers that gathered here in prayer. For this reason it is made up by a vast, high and luminous hall. This powerful complex can be reached from the Urbica Gate of St. Francis that leads to the suggestive Piazza Inferiore square, enclosed on the sides by a portico that is destined, today as in the past, to welcome the immense crowd of pilgrims that come each year to pay homage to the saint’s remains. From this square it is possible to reach the Lower Basilica, built in 1238, just two years after the saint’s death. The church’s original layout in the shape of the Tau (the Greek letter that symbolizes St. Francis) was later expanded. Today, the church preserves a double treasure: a spiritual one in the crypt below where the mortal remains of St. Francis are conserved, and an extraordinary artistic treasure of the repertoire of frescoes that embellish the walls, signed by some of the most important master painters of the 13th and 14th centuries: from Giotto to Cimabue, from Pietro Lorenzetti to Simone Martini.