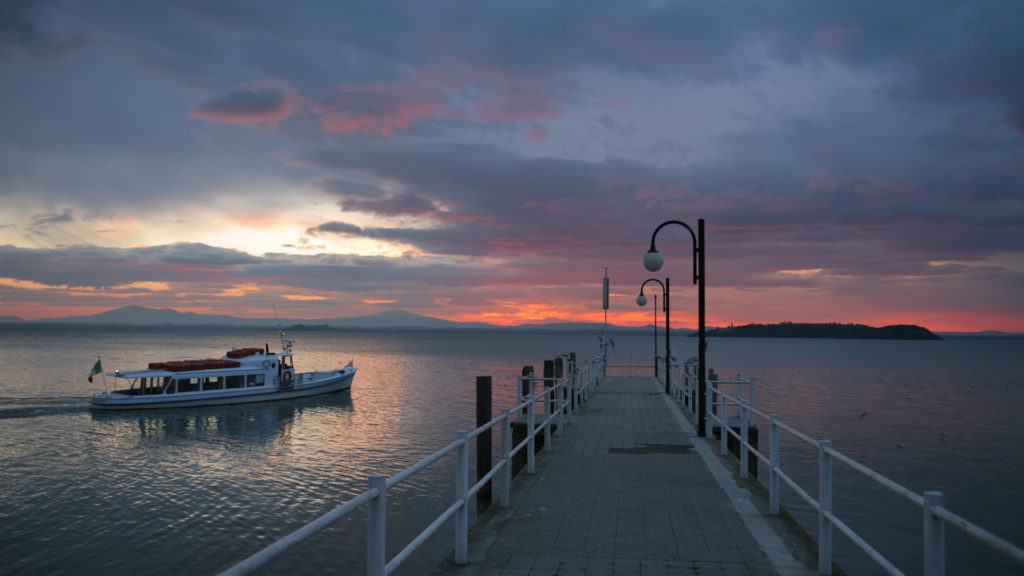 An important tourist destination for Lake Trasimeno, Passignano is situated on a steep promontory that slopes down towards the lake, surrounded by a vast expanse of olive groves. Just like other area villages, Passignano was also an important fortified village thanks to its strategic position along the critical communication route that from Perugia led northwards. The town’s name derives from the Latin word “Passinianum”, meaning “place of the past”.  Its current urban layout reveals the various construction phases, diluted through time starting from the construction of the Fortress, of which traces of the surrounding walls are still visible along with the 14th century Ponente Tower. Later on, additions were made in the back of the ancient building that were oriented towards the lake. After entering the historic centre there’s the Church of San Rocco, with its Renaissance form, and the Church of San Bernardino that, using a rather unique solution, forms a single building with the overhead Oratory of the Holy Sacrament. Also of ancient origins is the primitive Pieve di San Cristoforo (10th century A.D.), today a cemetery church, whose walls preserve a series of depictions of Saints and ex voto works offering a fascinating glimpse of the rural society of the age. Just outside the residential area visitors should stop at the Sanctuary of the Madonna of the Olive Grove (1582-1586), an example of the profound religious faith of the local people. In fact, the name of the sanctuary alludes to an episode that took place in 1521 when a noblewoman, to escape the massacres that were occurring during the war between Perugia and Arezzo, fled in a boat, praying to the Virgin Mary to save her from the rough waters she was crossing. In exchange, she promised that a new church would be built on the site where she would come ashore. The woman kept her promise and with the help of the fishermen in the small village she built the sanctuary.