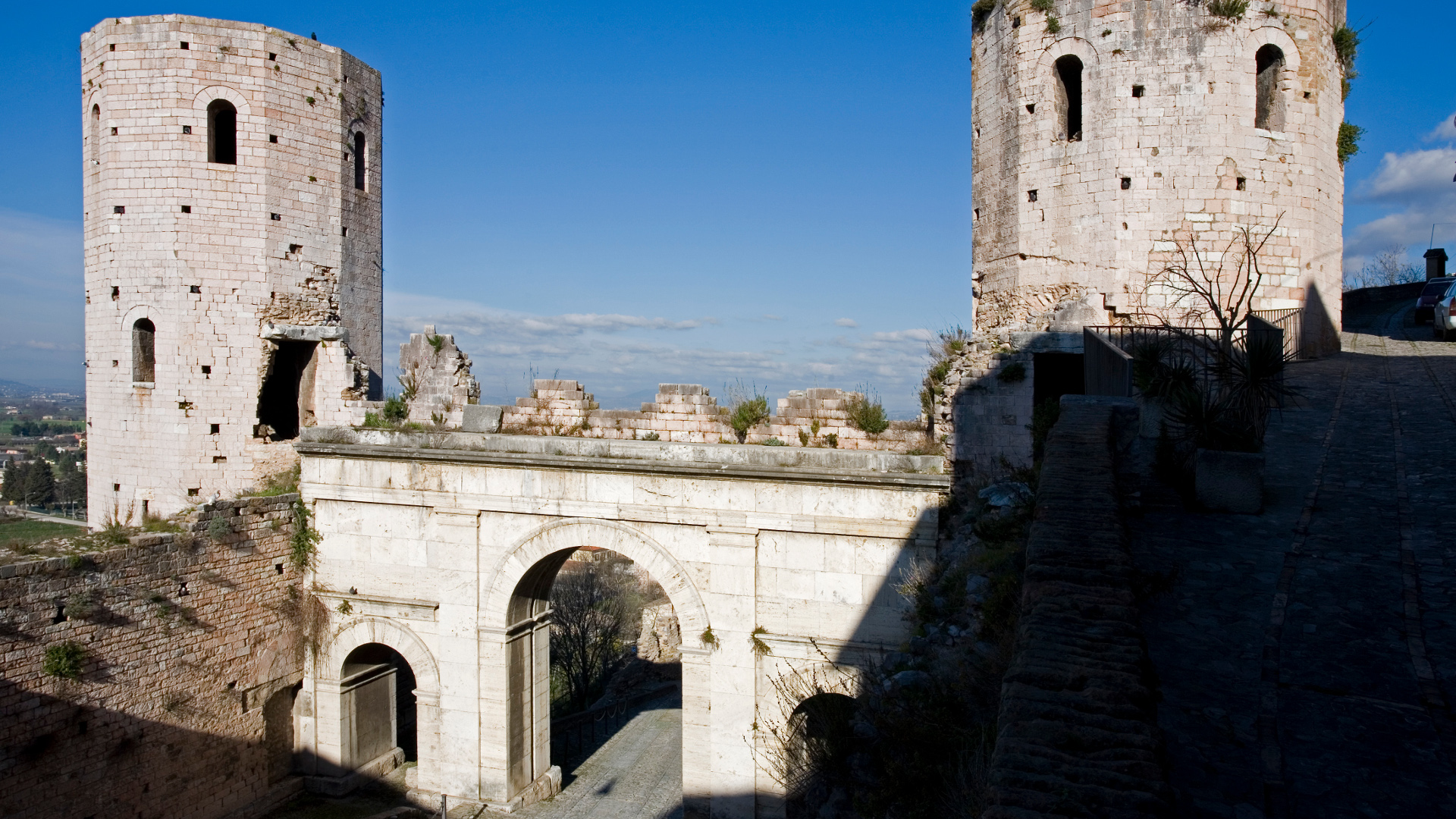 Nestled onto the farthest slope of Mount Subasio, Spello is a characteristic medieval village with ancient historic origins. Founded by the primitive population of the Umbrians, it was given the name Hispellum by the Roman rulers that first named it a Municipium and later a Julia Colony. This was a period of great prosperity for the village, as evidenced by the fact that Spello had the jurisdiction over and was responsible for organizing sacred rites in the important Clitunno Springs area. Traces of the town’s greatness can still be seen in its numerous monuments and sites from the Roman age: the Roman Amphitheatre (1st century A.D.) outside of the city walls, located along the ancient Via Flaminia road in an area occupied by numerous places of worship; the Consular Gate, from the Triumviral – Augustan age, embellished by three statutes, most likely from the Republican age, that originated from the area of the amphitheatre. There’s also the Urbica and Venus Gates. In the Middle Ages the Venus Gate was flanked by the imposing mass of the two dodecagonal towers known as the “Propertius’ Towers. The Arce Gate provided access to the upper part of the city. The large complex of Roman Mosaics, recently discovered in the village Sant’Anna where scenes from the sea are depicted, was most likely a part of a villa or a thermal complex. Numerous remains from the Roman walls still stand today, which also provided the foundation for the medieval walls. But in addition to its Roman character, Spello has many medieval elements including its narrow, winding streets and lively and flower-strewn alleyways, onto which two artistic gems open up: the Tega Chapel, built in the 14th century as the seat of the Confraternity of the Followers of St. Anne, decorated with frescoes from local painters such as the Foligno native Niccolò Alunno, creator of the Crucifixion. The Collegiate Church of Santa Maria Maggiore, which rises up from the ruins of an ancient pagan temple, is a valuable “container” of two frescoes from the late work of Perugino and one of the most fascinating masterpiece paintings: the Baglioni Chapel, skilfully frescoed in 1501 by Pinturicchio depicting Three Episodes from the Infancy of Christ. On the side of the church, in the rooms of the 16th century Palazzo dei Canonici is the site of the local Picture Gallery, where visitors can admire frescoes, paintings, sculptures, gold works of art and religious furnishing pieces arranged in chronological order from the 12th century to the 1900’s. Passing along the central Via Cavour road, just after the Collegiate Church S. M. Maggiore is the church of Sant’Andrea, where in faraway 1253 one of the first communities of Friar Minors was founded, the inside of which houses frescoes from the Foligno school and a great altar piece depicting the Madonna and Child signed in 1508 by Pinturicchio. Slightly further ahead is the Church of San Lorenzo, built in 1120 and later subjected to numerous reconstructions. Outside of the city walls rises up one of the town’s most charming Romanesque buildings: the Church of San Claudio (12th century), the interior of which is embellished by 14th century frescoes that decorate the semicircular apse and the central nave. Further on there’s Villa Fidelia, also known as “Costanzi”, which rises up on a pre-existing place of worship that dates back to the age of the Romans. The current villa was built over a period between 1805 and 1830 in an extremely rectangular and elegant form. In addition to the villa, the complex includes a Baroque garden, an Italian garden, a lemon-house where exhibitions and conferences are held, a park of oak trees, an olive grove, a horse riding area and a church.